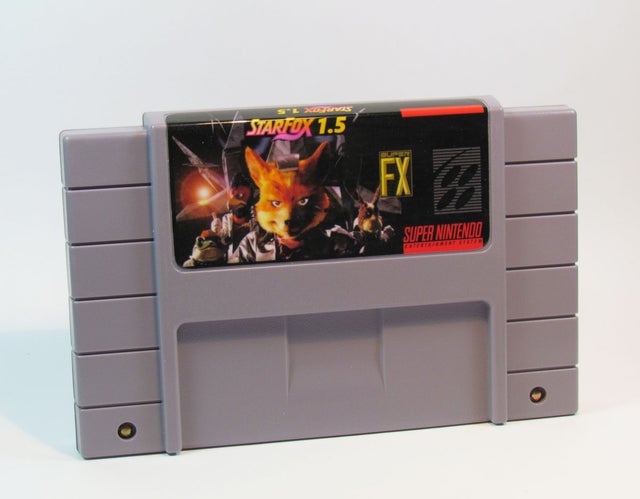 It’s not Star Fox 2, nor Star Fox, it’s a prototype that in-between.

Add to Cart
Old Prototype Stock - is for older models of this reproduction that we're selling off. The PCB will use wires & not our adaptor PCB. The label may have imperfections & the rear shell will have cosmetic damage (faded grey, scratches, or yellow stains).
Yet, the game/rom plays the same as "new stock". Please note stock is limited & one per customer. ​

New Stock - will use our nicer adaptor PCB, new die cut label, & high quality shells. Cart will look really good.
This reproduction is for an early Star Fox 2 build/beta. The build/beta is stable, early, buggy, and full of beta content. It runs well on authentic hardware. Yet, expect some bugs/crashes, and code anomalies – events that happen that cannot be explained by logic.

Due to the many Star Fox 2 prototypes out there we decided to call this one “Star Fox 1.5” for simplicity; a Vintex 64 exclusive term. We believe it stands on its own for being distant from the final Star Fox 2 and with DNA from the original Star Fox. The official name of this Prototype between “April 1994 build” & “May 1994 build”. See the Snes Central article for more info & details of what to expect from content within. https://snescentral.com/article.php?id=0077.

Also see additional info from unseen64, the edition is the "Beta 02"
www.unseen64.net/2008/05/02/star-fox-2-beta-analysis/
​
This is a early build of a game: levels are a bit empty, uses a menu to access all levels, special modes, and limited music/sound. Some music has a nice melody that give it character of its own, but can get repetitive. The game will freeze in areas or not exit out of levels; need restart. A lot of early enemies, bosses, & experimental content is within. Also, early bosses development, some info on screen navigation, with development processing tools visible on screen.
​With that said, it’s fully playable and enjoyable! You just need to take little time in getting used to the tricks when playing. Then becomes easy to fully explore the content within. Players can navigate the menus, try different settings, fly the air wing at different location & soon patterns can be understood on how to avoid the bugs. Also, a sense of exploration on what can be found when giving it some time.  What hidden secrets that never before been seen? Its possible to find some things that not been reported online.
Some noticeable tricks when running the game:
​A notable highlight is the multiplayer mode. It’s fully functioning. Plug in two controllers and you can dog fight with a friend. Another worthy feature is air wing hover mode & new fox character (Lady) in multiplayer selection screen.

Having this beta on a reproduction is a first in the SNES retro gaming scene! A Vintex 64 exclusive!
​
For those willing to look past the bugs and beta aspects it’s a treat to explore & own. An early Star Fox 2 development that easy to slap in your SNES and enjoy. A must for any classic Star Fox fan or for the collector that after something special in its own right.
​FAQ:

Do you plan put other Star Fox 2 prototype/builds/beta on reproductions?
No. We tested all prototypes/build/beta we can find. Some not work at all on real hardware, some just water downed version of final Star Fox 2, some have less content than Star Fox 1.5. We found this build to be the best and most worth while content to put on a reproduction. It very likely to be the best build for uniqueness that make sense to have cart of own. Yet, if something comes up we do have number of digits between 1.0 & 2.0.

Does Star Fox 1.5 have save feature?
No. The game coded not make use of it. So we didn’t bother putting in a battery.

Why is Fox so pissed in that label?
We have no idea; it was taken from an Ad for the original Star Fox release. Probably to get marketing attention. We felt it is quite unique and a nice touch.  The statement “Man... Fox is pissed!” came from an Angry Video Game Nerd episode while he was reviewed old video game magazines.
This label more novelty value. Personal we find the centre Fox label much nicer.