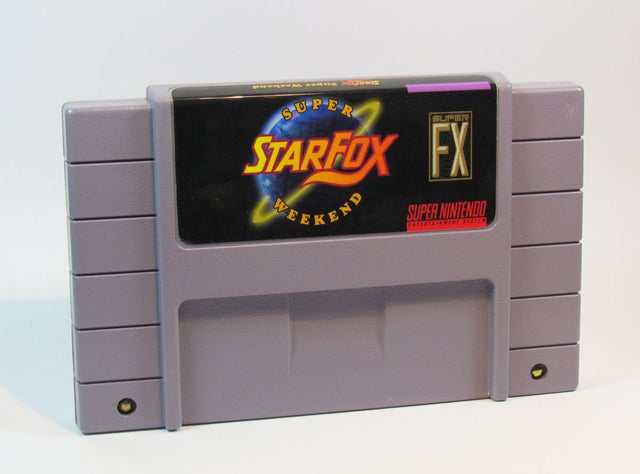 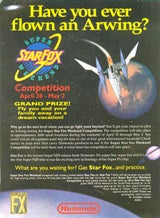 Add to Cart
New Stock - will use our nicer adaptor PCB, new die cut label, & high quality shells. Cart will look really good. ​
Star Fox was an ambition undertaking and release by Nintendo back in the day. To bring true 3D graphics to home gaming. Development began in the NES era, later an expert team of chip designers from Cambridge developed the hardware (Super FX chip) and all this lead to a very ambitious production & release of 1.7 million copies, a TV commercial, and not surprising a contest held in many countries around the world to promote the release & hype.

The official cartridge is one of the rarest for the SNES. It originally became available to Nintendo Power subscribers, after the contest was finished. Now a days it shows up on eBay from time to time, but normally goes for over $1,000.
​
Regarding the game, Super Weekend has 3 custom levels with selected elements from the original Star Fox game. You are given four minutes to get as best score possible before the timer runs out. The first two levels are shorter version of Corneia and the Asteroid field. The 3rd level a custom space level that specific to the contest/cartridge. So don’t expect a long gaming experience, this likely was meant on the short side to allow many content participants to take turns. With that said the enjoyment comes from challenge and experimentation to raise you score as high as possible, or do speed tricks to try see more of the 3rd level with if the timer was frozen would loop.
​This listing is for a reproduction of the “Super Weekend Cartridge”. The clock speed is set to be same as the original Super Weekend; so the scores you get will reflect the same in the authentic “Super Weekend Cartridge”. Note, the official, like this reproduction, has no save feature so players have to record own score for records.

If interested in learning more about this game or the Super Star Fox Weekend Competition, please see the Snes Central Article: http://www.snescentral.com/article.php?id=0942.

Please note this item is only available one per customer and suspicious orders or requests will not be processed.
​
For those looking for a cost-effective way to enjoy Super Weekend at an affordable price, or the serious collector who wishes to keep his/her original well protected. This Cartridge is for you!
​FAQ:

Do you have a version of Super Weekend (SW) with four minutes time limit increased or frozen?
What is this rumour of lost stage in Super Weekend (SW) & how can I access it?
Sadly, we do not have a SW rom with extra time (nor time frozen), nor way to access this possible lost level. We cannot confirm if this lost level is real or not. The repo above is for the official SW rom exactly; right down to the last 1 & 0.

​We did find this link that offers codes for Super Weekend: http://gamehacking.org/game/44578
Some of the codes affect the time limit & the last code notes a "Stage Modifier" with hidden stage called "Meteor", in the past it was called "Venom at Night".
If anyone can test these code or provide, or ask someone to provide, a modified rom with these code enabled it be much appropriated!

We at Vintex 64 even purchased the rare SNES FX Action Reply 2 to get the codes working, but sadly no luck.